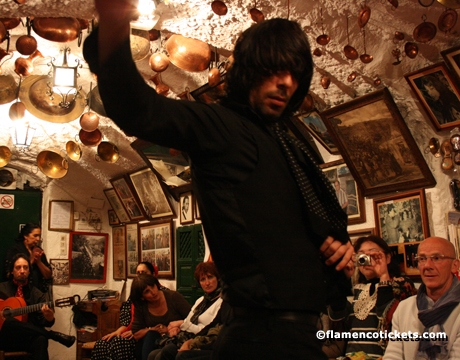 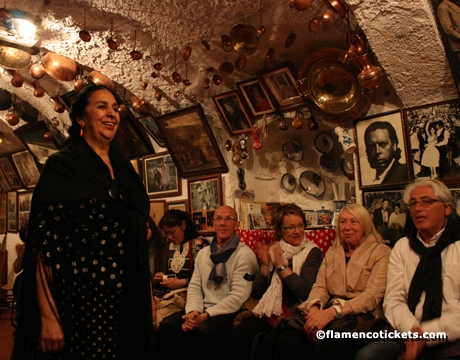 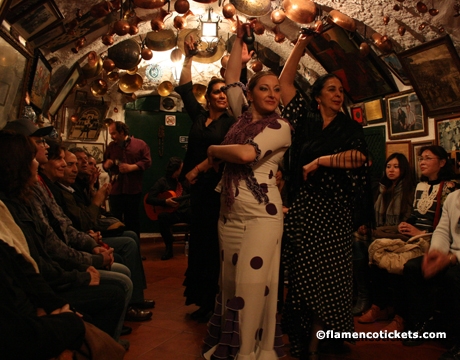 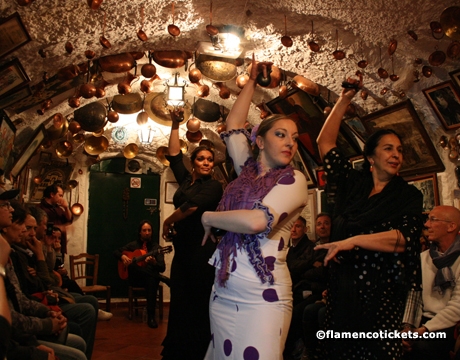 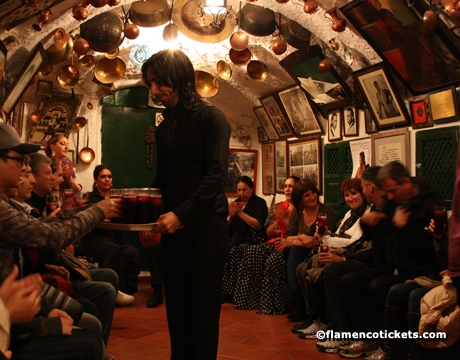 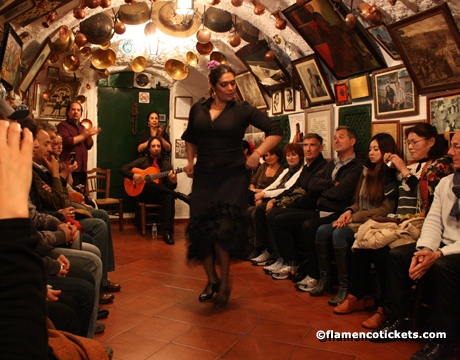 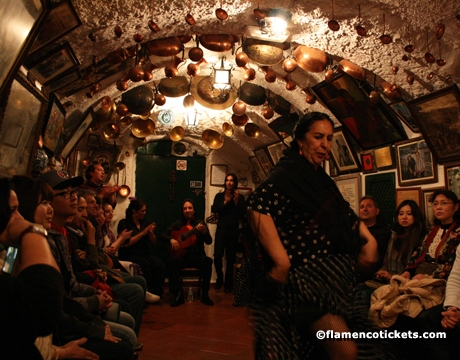 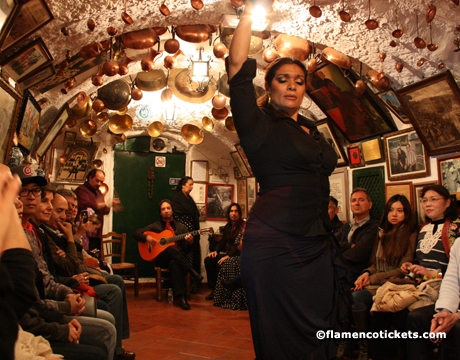 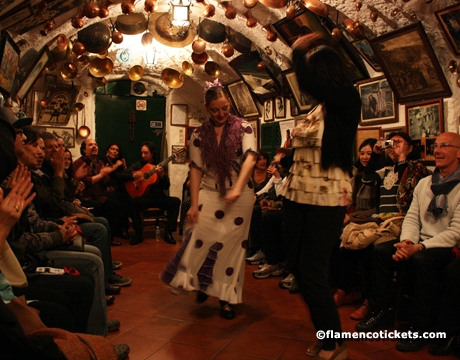 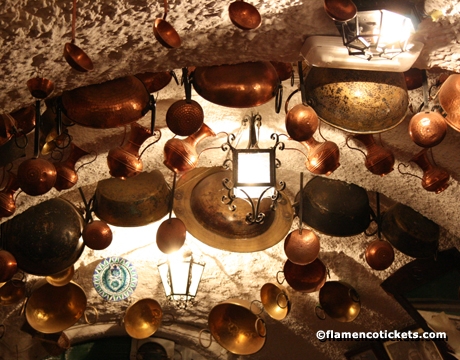 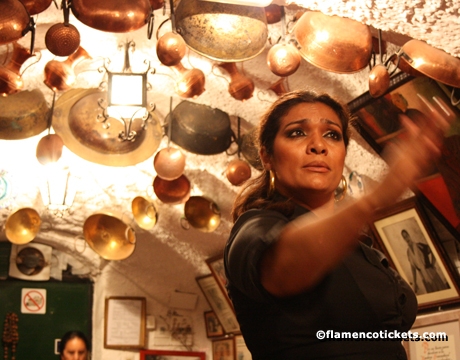 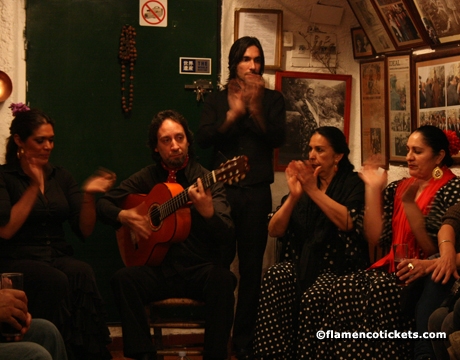 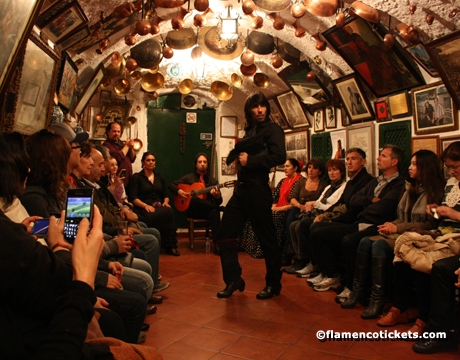 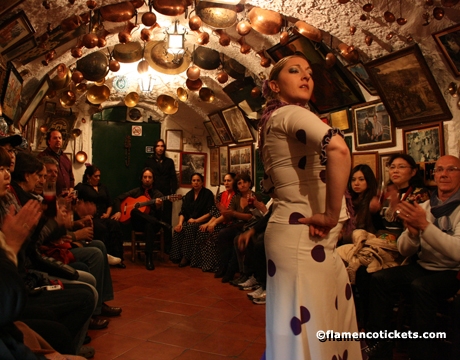 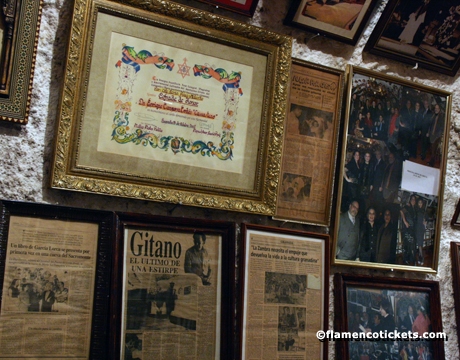 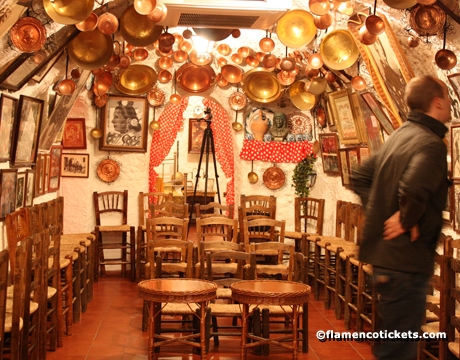 La Zambra de María La Canastera is located in the Sacramonte quarter of Granada. Now over 50 years in operation, the cave is one of the oldest flamenco cave venues in the city of Granada. Inside the former cave home has been decorated with photographs of famous visitors as well as traditional pottery and copperware typical of the region. With a capacity of approximately 60 people, the nightly flamenco shows are intimate and familiar, and continue to feature the family of Maria La Canastera. Today her son, Enrique, continues to operate the home which has now been converted into a venue for flamenco performances as well as a cultural museum. Several of the rooms in the cave dwelling have been preserved - the kitchen and two bedrooms are in their original state. The living room continues to serve as the main stage for the performances.

Maria Cortes Heredia, a flamenco dancer and singer known as "La Canastera", was born in 1913. Her artistic name came at an early age and is owed to her father, a local craftsman who specialized in weaving artisan wicker baskets. Maria began dancing in the Sacromonte Zambras where she quickly rose to fame. By the age of 16 she was already travelling to Barcelona to perform with some of flamenco's most famous artists. Over time she shared the stage with names such as Carmen Amaya, Pepe Marchena and La Niña de los Peines. She made numerous recordings as well as television appearances.

La Zambra de María La Canastera also offers the option of transportation (round trip) with pickup from city center locations (direct pickup from some hotels along the route is possible). The route follows the narrow streets of the Albayzin until reaching the Sacromonte quarter and La Zambra de María La Canastera, providing a panoramic visit for guests. Currently the transport/tour option is not offered due to the pandemic situation.

When in Granada do come for this unique experience. Be mesmerised by the passionate performance of the professional dancers, singer & guitarist. It is a little cramped in a ‘cave house’ fitting 50+ people but I guess that is the whole experience. We made our reservation on the same day via email and got a confirmation. Paid cash at entrance - 24€ for show + a drink. Located in the hills of Sacramento, it is an easy 20 min slow walk from city uphill. Take the bus 34 which is right outside the venue back to city center as it is difficult to get a taxi back. Highly recommend!
The show last night will be a highlight of our summer! The artists sang and danced and played with skill and passion. It was an incredible show.
It started with a warning of a lame family show when an older dancer had her number. Well little did we know what to expect! It quickly transformed in once in a lifetime experience . Not sure how I missed to film the best dance I ever seen in my lifetime, but I did ! Youngest performer was absolutely stunning from a category of a genius ! Guitarist is not to be forgotten! Well when you put together the puzzle of all performers then they play as a well tuned orchestra complementing each other ! Do not miss it !
What a dissapointment was this flamenco show. The dancers were rude, their performance was passionless and they looked like they just wanted the show to end. The guitar and singer were good but their interventions were way to long. The guy in charge was annoyed when I requested a taxi. Started to shut down the place and I was waiting for them to call the taxi. There has to be much better options in Granada than this venue. Dont throw your money away, go somewhere else. Anywhere will be better.
Very intimate place for watching flamenco dancing. Tickets a bit pricy but come with a drink. Interesting place
No waiting
No booking fees
Secure payment
Personal attention