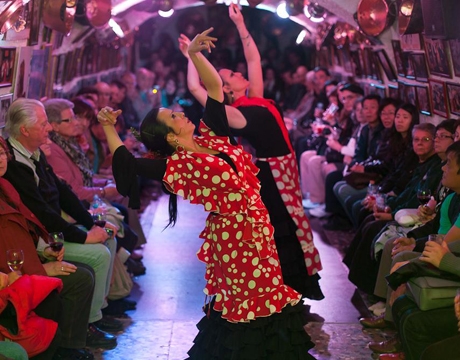 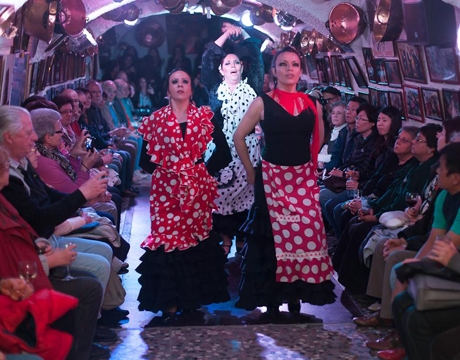 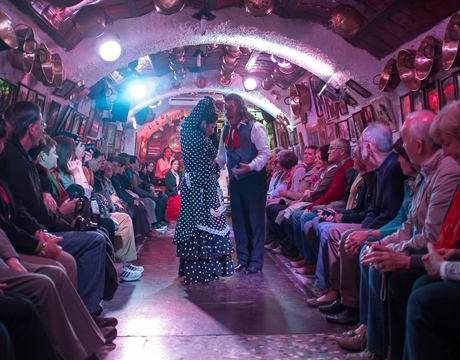 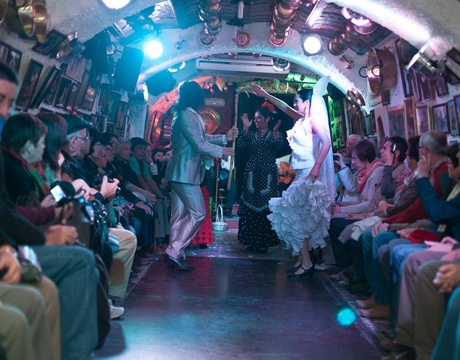 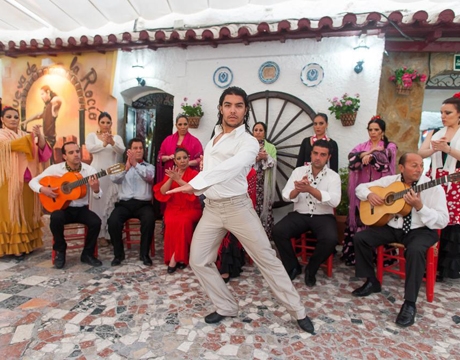 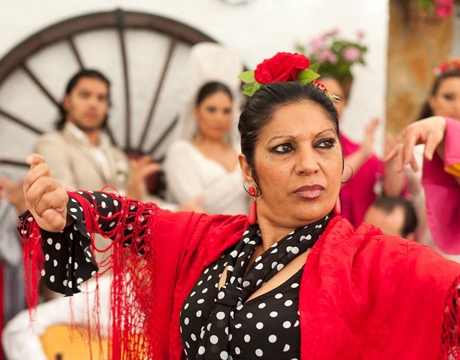 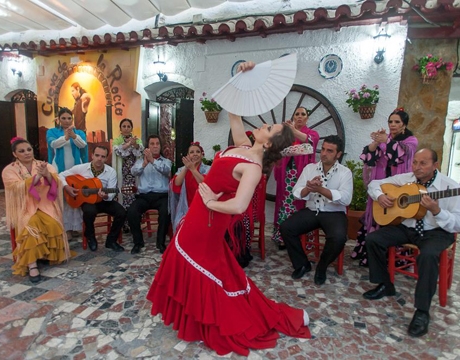 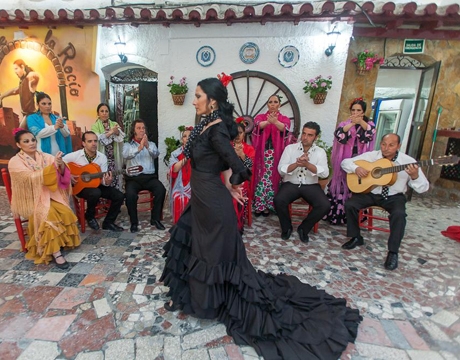 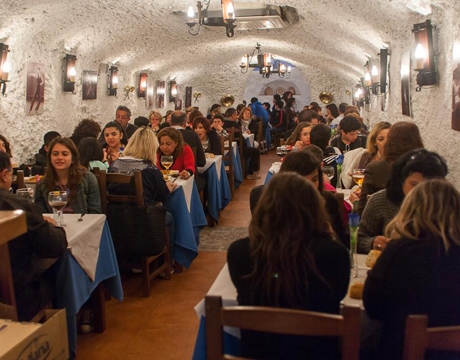 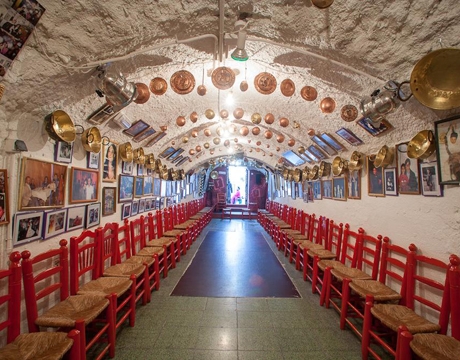 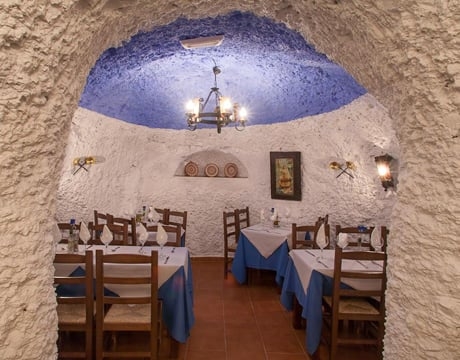 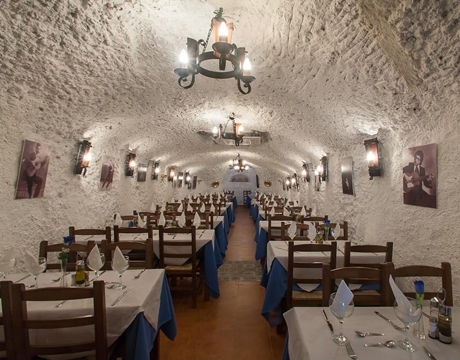 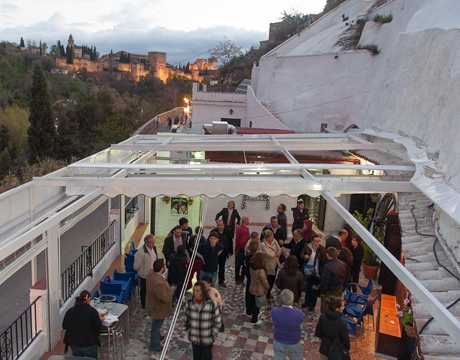 Located along the Camino de Sacromonte, Cueva de La Rocio features two different caves plus a large outdoor terrace with fabulous views of the Alhambra and Generalife. The flamenco shows of approximately 45 minutes include between six to eight different artists. Seating is on each side of the cave with the artists performing in close proximity. Spectators are able to see the show up close, typical of Zambra flamenco which characteristic of the region of Granada. This style can trace its origins to traditional gypsy wedding celebrations which were once held in the caves of Sacromonte.

Cueva de La Rocio was one of the first venues of its kind in the Sacromonte quarter of Granada. Founded by Don Andres Maya Fajardo and Doña Rocio Fernandez Bustamante in the early 50's, the cave remains under the direction of the Maya family, a prominent name in the world of flamenco. In recent years Cueva de La Rocio has had the pleasure of receiving many famous visitors including the First Lady of the United States, Michelle Obama, as well as the Kings of Spain, Juan Carlos and Queen Sofia who visited with former President of the United States, Bill Clinton.

The flamenco show in Cueva de La Rocio includes a drink or dinner. For the 22:00 show there are ticket options with transportation (round trip) and a panoramic visit, including collection from city center locations (direct pickup from some hotels along the route is possible) and a walking tour through the Albayzín, the former Arab quarter known for its narrow streets, tranquil plazas and views of the Alhambra and Generalife. The walking tour takes places either before or after the show. Currently the transport/tour option is not offered due to the pandemic situation. The option of the show with dinner includes a fixed price menu featuring typical dishes from Granada. The menu includes two courses to choose from, dessert and drink. Dining is inside one of the caves or on the terrace during the spring and summer (weather permitting).

I bought the ticket for a Flamenco show via my hotel. Although this place was far out of the way, it was good. The staff were nice enough and the sangria, that was included in the price, was okay. But the main attraction is the Flamenco dancers. I love it! We get to watch the show inside a cave. They were observing proper COVID measures. This was a good experience overall and I would recommend this place.
This was one of my experiences while in Spain! Locals rec come see this location and we didn’t regret it. It’s up close and personal. The expressiveness is powerful. You definitely get your money’s worth. I would go again.
Had a great time. Rush to finish the sangria before the performance started but that's our fault for not getting to the venue well ahead of the performance time, as requested. --- to that note: bit of an uphill walk and traffic can get jammed up for the latter shows. Wonderful sampling of different styles of dance and costume, male and female. Worked perfect as an introduction to flamenco for a tourist like me.
Michelle Obama visited here... So i mean lol thats US royalty. But beyond star power visits the dancing was magical. The space was intimate and passion was alll throughout the air. One of the most invigorating environments and art I've seen in a while. Its the difference between your favorite performance because it has all the bells and whistles vs. Raw authentic expression. This was very much the latter. Worth every penny! Please go if in granada. You will thank yourself. Oh and a fun date idea. Hit up 5 restaurants on the way to the night performance. Most will give you tapas with your drink. Made for a beautiful night of memories.
GREAT SHOW, NOT COMFORTABLE- Booked this show for me and my parents while visiting Granada. I’m a Spanish local and have seen many flamenco shows, and I would say the show was well done. However unfortunately it’s difficult to get past the discomfort of the chairs and the setup. The chairs are very small and very close together. Also, because of the setup of the area, you’re looking in one direction the entire time and my parents’ necks started to hurt. Makes it difficult to enjoy the show. Also, as a local I would stay away from the food and drinks. Very overpriced and not good quality. Have dinner elsewhere and come enjoy a nice flamenco show for an hour at this establishment. Just keep in mind that you will not be comfortable during the show.
No waiting
No booking fees
Secure payment
Personal attention